Those enrolled in the Fashion Design and Fashion Business programs at Genesee Community College were given the amazing opportunity to win dress forms donated to the school by PGM Dress Forms, the leading dress form manufacturer in the United States, based out of California. 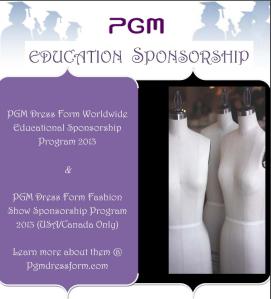 The winners of these dress forms are career-driven, hardworking students, who are also extremely talented designers at GCC. The dress forms will make a large impact on these three creative women, and surely help them to accomplish future career goals, which they hold dearly and consider with upmost seriousness.

Accomplished students Candace Cooper, Alaina Shannon, and Natalie Brown are the winners of the 2014 Dress Form Contest! All of the girls wrote entry essays entailing what they would do if they won a PGM dress form, and how this award would help to accomplish their career goals. Candace Cooper writes, “When Professor Ehrhart initially notified me of the amazing opportunity of the dress form competition, I was overly thrilled at the news! Being that I am a design student I would love to own a dress form. I’ve always wanted to invest into one, but looking online, the prices were a little intimidating with them ranging from $1,500 to $2,000.” Candace’s collection entitled “ÉCLAT” will be featured in the upcoming GCC 33rd Annual Fashion Show entitled Ethereal. Alaina addresses why she would love to win a PGM dress form and how it would help her to achieve her artistic vision. In her contest essay, she states that, “By winning a dress form I would be capable of anything. As an artist, often times I conjure up creativity at the most random and unexpected times as my mind begins to soar into a new and exciting realm. When I visualize an idea in my head, I feel the urgency to get right to work. I sketch my ideas, gather and cut fabric, and begin to layout the image that is in my head. However, tedious measurements, and the annoyance of making a human stand shivering cold for forty minutes while being draped and pinned is a nuisance. I often find myself wishing I could constantly have access to a dress form so that I could put my creative, crazy mind at ease.”  Alaina’s designs will be featured in the upcoming GCC Fashion Show as well, in a scene entitled “Americana”. Natalie Brown envisions what it would be like to own a personal dress form in her contest essay; writing that, “If I had my own dress form, I could create my own design studio space in my room at my house. I currently have my very own sewing machine that I bought myself, so having my own dress form would complete my own personal working space.” Natalie Brown’s designs will also be featured in the upcoming GCC Ethereal Fashion Show. Her scene is called “Revival”, the featured clothing is previously owned and repurposed in order to be transformed from an old garment into a piece that is new and exciting. These dress forms are certainly in good hands; Congratulations Candace, Alaina, and Natalie, we can’t wait to see what amazing designs you all create for the upcoming fashion show and in the near future!

Also, on behalf of everyone in the fashion program at Genesee Community College I’d like to give a big thank you to PGM Dress Forms for donating three dress forms to these well-deserving girls, and to Professor Ehrhart and Professor Dudkowski for continuing to offer this amazing opportunity to GCC’s wonderfully talented design students.