Want to learn more about the world of crystals and their many uses?

Thanks to Discover Magazine, here are 20 things you may not have known about crystals: 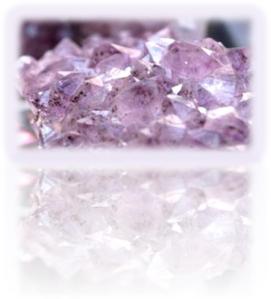 1  It’s all about the rhythm: Crystals are repeating, three-dimensional arrangements of atoms, ions, or molecules.

2 Almost any solid material can crystallize—even DNA. Chemists from New York University, Purdue University, and the Argonne National Laboratoryrecently created DNA crystals large enough to see with the naked eye. The work could have applications in nanoelectronics and drug development.

3 One thing that is not a crystal: leaded “crystal” glass, like the vases that so many newlyweds dread. (Glass consists of atoms or molecules all in a jumble, not in the well-patterned order that defines a crystal.)

4  The oldest known pieces of our planet’s surface are 4.4-billion-year-old zircon crystals from the Jack Hills of western Australia.

5  The center of the earth was once thought to be a single, 1,500-mile-wide iron crystal. Seismic studies now show that the inner core is not a single solid but perhaps an aggregate of smaller crystals.

6  Tiny silicate crystals, which need high temperatures to form, have been found inside icy comets from the solar system’s distant, chilly edges. Powerful flares from the sun may have provided the necessary heat.

7  In Chihuahua,  Mexico, a limestone cavern 1,000 feet below the surface contains the largest crystals in the world: glittering gypsum formations up to 6 feet in diameter and 36 feet long, weighing as much as 55 tons.

8  You may be sitting in a gypsum cave right now: It is a primary component of drywall.

9  Are the streets of New York paved with gold? No, but the bedrock schist beneath them is studded with opal, beryl, chrysoberyl, garnet, and three kinds of tourmaline.

10  In 1885 a garnet weighing nearly 10 pounds was discovered beneath 35th Street near Broadway, close to today’s Macy’s store. According to urban lore, it was unearthed either during subway construction or by a laborer digging a sewer.

11 Cheaper by the pound: The so-called Subway Garnet was sold within a day, reportedly for $100—just $2,300 in today’s dollars.

12  The unit of measure for gemstones had humble beginnings. “Carat” comes from the Greek keration, or “carob bean,” which was used as a standard for weighing small quantities. It is equivalent to 200 milligrams, or about 0.007 ounce.

13  When Richard Burton bought Elizabeth Taylor the heart-shaped Taj-Mahal diamond, he is said to have bragged, “It has so many carats, it’s almost a turnip.”

14 A “fancy intense pink” diamond recently set a world record when it was purchased at auction for $46 million by a London jeweler.

15  The Cullinan diamond is the largest known gem diamond—or, actually, was. It weighed 3,106 carats, or nearly a pound and a half, when it was discovered in South Africa in 1905, but it has since been cut into more than 100 stones.

16  The Cullinan stones, all flawless, are now part of the British Regalia. The largest, a 530-carat behemoth, is set in one of the British royal scepters.

17  For the rest of us, there is crystallized sodium chloride, otherwise known as salt. We are literally awash in it: If the water were evaporated from the world’s oceans, we’d be left with 4.5 million cubic miles of salt, equivalent to a cube measuring 165 miles on each side.

18  Another crystal for commoners: sugar. Each American eats an average of more than 130 pounds of it per year.

19  As if sugar’s ties to obesity and tooth decay weren’t enough, new research out of Imperial College London suggests that it contributes to high blood pressure, too.

20 Snow is near-pure crystallized water, but when it collects on the ground it acts as a reservoir for atmospheric pollutants such as mercury and soot. So you probably shouldn’t eat the white snow either.

Come to the Wellness Activity to explore the power of crystals and see what they are all about!