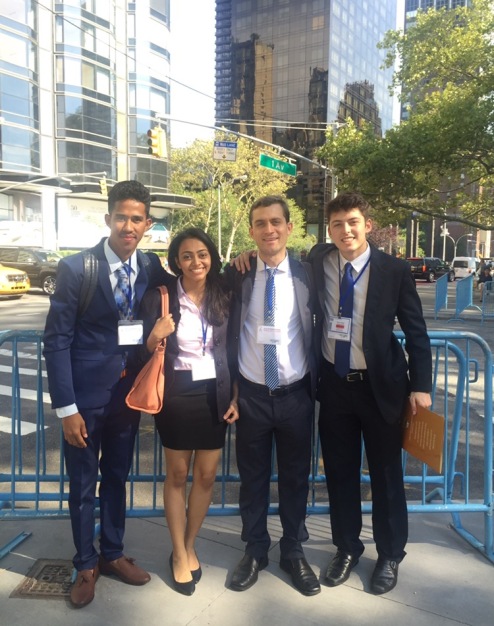 Two of GCC’s international students from Timor-Leste, an island nation in southeast Asia, attended the annual Human Rights Summit.  These students, Jorguino Savio and Arsenio Ferreira, are both in their first semester of GCC’s newest degree program, Food Processing Technology.  Both students are attending the college on full scholarships through the Timor-Leste Hillary Clinton Scholarship Program administered by the Institute of International Education and funded through the United States Agency for International Development.

Savio and Ferreira attended the 13th annual Human Rights Summit, which was host at the United Nations on August 25th and 26th.  This summit featured young volunteers who were using their education to end human trafficking, bullying, poverty, war, police brutality, gang violence, and other such human rights violations.  The youth delegates, 72 young men and women, presented their work to not only to their peers, but also the 400 guests in attendance.

The Timor-Leste Hillary Clinton Scholarship program is funded through the United States Agency for International Development. Scholarships were awarded to academically talented and qualified Timorese students with the goal of strengthening the base of skilled, high performing professionals in Timor-Leste to contribute to the country’s economic and social development.

Youth delegates presented their work to their peers and the 400 guests attending and heard from human rights luminaries including six ambassadors and representatives of permanent missions to the United Nations.

Ambassador Irenee Omositson Namboka, former United Nations Human Rights Protection Advisor and Associate Fellow told the youth delegates that the right to education, including human rights education, is second only to the right to life. “Education is the primary vehicle by which economically and socially marginalized adults and children can lift themselves out of poverty and obtain the means to participate fully in their communities.”