Hello Everyone on this beautiful day we have off of classes! You will have to bare with me today, as I am blogging from a Mac Computer and have not used one in quite some time.Here is my experience at Darien Lake on Saturday! 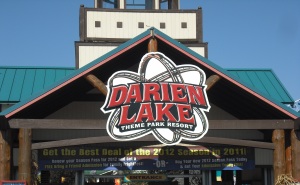 Thanks to the generosity of Kevin Manne, we got free tickets to Darien Lake and went to Frightfest on Saturday afternoon. It was a great day and a very exciting event. After parking right by the entrance (lucky us) we walked into the park and did some shopping. We didn’t buy much, except way too much rock candy, but there were a lot of great things that were for sale. The best thing I saw was baby stuffed animals wrapped in blankets. They were sooo adorable (unfortunately no picture) and I wanted to get one for my sister in law, but couldn’t afford it 😦 . Then, we walked into the park and jumped right into lunch :). We ate at Beaver Brothers Restaurant and let me tell you the food was delicious! I had a “ceasar salad” (I put it in quotes, because I got ranch dressing instead of the ceasar dressing) and my best friend had a Bucky’s Bacon Burger. It smelled heavenly and I know that the bacon, since I stole a piece, was good at least.

After lunch, we proceeded to the rides for the day. A lot of things were closed, being this late in the season and it being Frightfest and all, but we were able to right five different rides; four for me. We started off with the Haymaker, which was basically a seat that you spun around in, and that was fun but we were kind of dizzy afterward. Then, we headed over to the carousel to relax a bit before we went to another thrilling ride. The next ride happened to be the Fright Night Bus Tour. Basically, we got onto a bus and the driver took us around the campgrounds where various Halloween themed things were set up. There were clowns, decapitated heads, zombies, etc. There were moments when the “monsters” got on the bus, there was fog, scary sounds, and even times when we almost hit someone with the bus. (It was all choreographed of course so don’t worry, no one got hurt; though a few kids did cry). It was a lot of fun and actually more funny than scary. We did it in the day time so, I am not sure what the difference would have been at night, but it was very well done. I mean, we thought we were on a ride instead of bus because the bus driver was so good at taking turns fast and everything. A lot of fun. Check it out next Fright fest. After that, we sat down and had a drink before heading to the last ride (mine anyway) of the night. The Raging Seas (another sit and spin type ride). My best friend also went on a roller coaster (I do not like roller coasters at all) called the Motocoster. It is a roller coaster where you sit on a motorcycle instead of in a bench seat like most roller coasters. I’ll admit, it is scary for me, because I feel like I am going to fall out even though there are plenty of restraints. She had a blast though, so I didn’t mind waiting the forty minutes for her to be done waiting and riding the coaster.

After all the rides, we made our way to the field by the lake to get ready for the Laser Spooktacular! It is a laser light show that is put on everyday during the season, but for Halloween, it becomes the Spooktacular! It was a lot of fun. They played songs like Addams Family, Harry Potter, Monster Mash, This is Halloween, etc. That lasted about 15 minutes and we headed to the parking lot. By the time we left the park it was 10:30PM and we had at least a forty minute drive back to Brockport, so we had a relaxing ride with some music to wind down from the exciting day and go to sleep as soon as we got back. 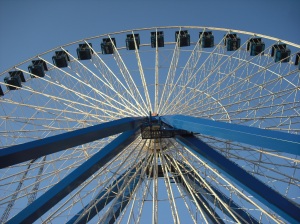 The only downside to the whole day, was that there was a problem with the Ferris Wheel, so we were unable to ride it. But that’s okay, there’s always next year!

Thank you again to Kevin Manne for the tickets! Bye bye for now everyone! Enjoy your day off!

One thought on “Darien Lake”